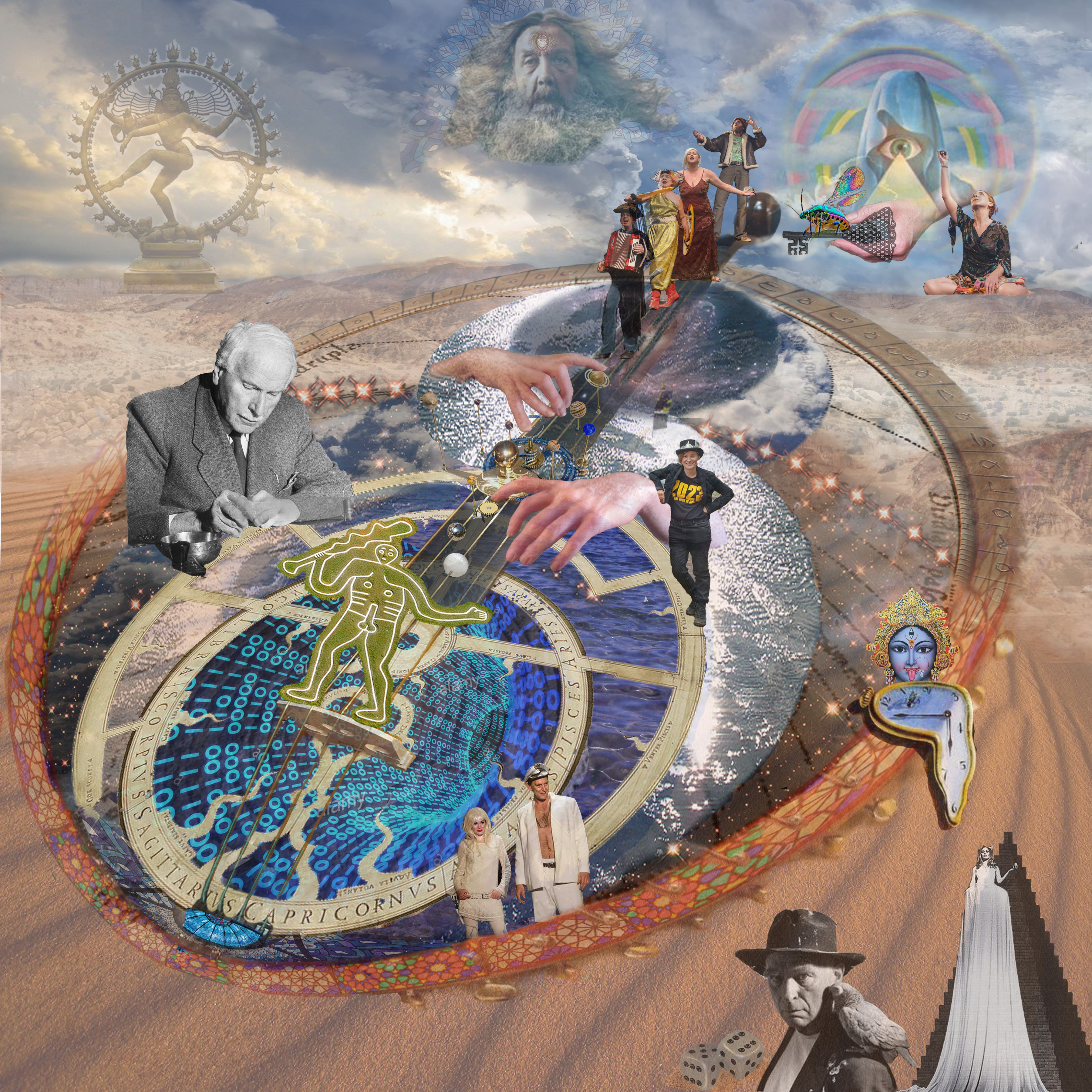 Photoshop collage adapted for ” The Pilgrims Opera ” , theatre production by The Mycellium on the Pilgrimage Cerne to CERN April 23rd 2019. The design is based on the concept of the Monochord of the Human Soul, 17th century diagram by Robert Fludd , illustrating the concept of the ” Harmony of the Spheres ” . as pioneered by Pythagorus .  This maps the maths of harmonic resonance & the octave, which he conceived of as corresponding to the resonance of the planetary spheres ascending from earth to heaven. The concept is the human soul is the microcosm to the macrocosm of the universe.   The hand of ” God ” ,( with deliberate humourous Monty Pythonesque overtones )  representing pure awareness, reaches down to attune the human soul like a giant instrument. In their hand is an ancient key of magic, inscribed with the glyph Abracadabra ( which means ” i create as I speak “.) With a twist of surrealism, the hands playing the strings have 6 fingers,  a reference to lucid dreaming practice , where if you look at your hand & it deforms you know you are dreaming & on the astral plane. 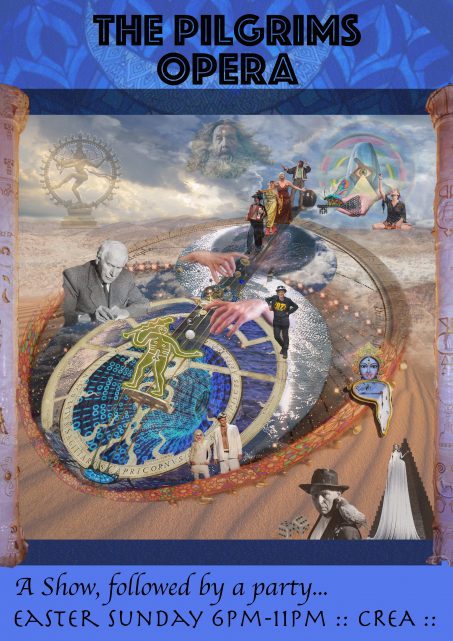 Inspired initially by the music of Shpongle , album Codex 6( Simon Posford )This piece became adapted to be the artwork for the ” Pilgrims Opera ” a production staged by The Mycellium at the creative community of Damunhur in Italy as part of ” The Pilgrimage ” April 2019. Led by Daisy Campbell ( playwright of The Cosmic Trigger Play )  69 Pilgrims travelled on a double decker bus from Cern Abbas in Dorset ( chalk man with the big cock ) to CERN in Switzerland ( science establishment ) to do a chaos magic ritual to “ Immanentize the Eschaton”  ., ending at Jungs garden Bolligen Tower in Switzerland.   Kate , who led the dreaming group , is seen plucking dreams & signs from the eye of the figure from the cover of the Illuminatus Trilogy by Robert Anton Wilson.   Members of the Cast of the Opera & Play Cosmic Trigger walk down the strings , The Discordian Accordianist , Eris , the Captain Hagbard Celine etc.  The ancient nature deity the Cerne Abbas Giant plays golf getting a whole in one …impregnating the gnostic space of gnothing at the science research centre of CERN , represented by the binary tunnel ( go beyond duality ? ) with our intentions for the future of humanity.   Jung watches over…and Alan Moore , affiliated with the group , is of course, God.   Daisy is pictured , and Ken Campbell , Daisys Father , playwright of The Illuminatus , & Pricillia , her Mother stands in the giant 23 foot high dress she wore in the play as Eris .  Behind her the KLF’s Peoples Pyramid , a tower of bricks they are building in Liverpool containing cremated ” mummified ” remains of the people.  Shiva, the statue at CERN , dances the dance of infinity , while Kali licks the clock of melting time. 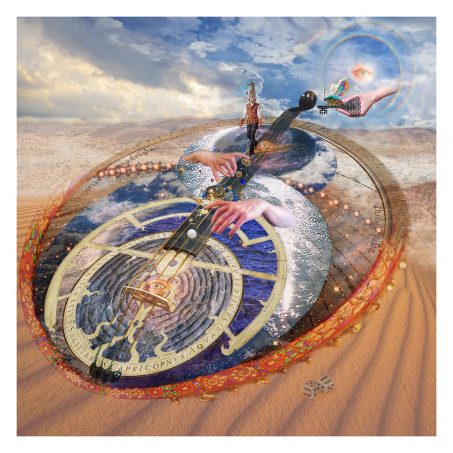